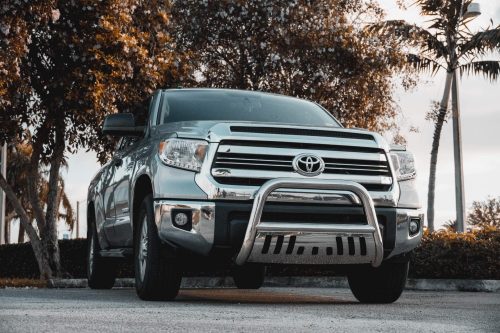 Toyota, the Japanese carmaker, has brought out new models in the past few months. They remain the world’s best-selling carmaker.

In fact, the all-new Toyota Sequoia is on its way. Also, the Toyota Tundra Hybrid is also causing quite the fracas. Then, to create even more hype around its latest creations. Also, the carmaker is going to display many of its latest vehicles at the 2022 Chicago Auto Show. It will open to the public this week, from February 12 to 21. The Japanese carmaker is planning to showcase the all-new 2023 Toyota Sequoia, the 2022 Toyota Capstone, and the all-electric bZ4X. Also, the carmaker is going to let the fans take some of the models out on track for a test drive. It will include the 2022 Tundra daily between 10 a.m. and 9:30 p.m.

Also, the all-new 2023 Sequoia is going to showcase the same new hybrid powertrain system. It will be featured in the Toyota Tundra with the twin-turbo V6 hybrid i-Force Max powertrain producing 437 horsepower and 583 lb-ft of torque.

Also, this powerplant does feature a unique motor-generator within the bell housing between the engine and 10-speed automatic transmission for increased pulling power. Moreover, this modern Toyota SUV does feature a body-on-frame chassis, independent front suspension, and a new rack-mounted electronic power steering system for an improved steering feel.

There are optional extras for the carmaker that will include a load-leveling rear height control air suspension. In addition to an Adaptive Variable Suspension (AVS) for those who are looking to tow regularly. In fact, the new Sequoia can also tow 25 percent more than the outgoing model (up to 9,000 lbs). It will be offered in five different trim levels for the Japanese trucks: SR5, Limited, Platinum, TRD Pro, and the Capstone grade.

How to Win an Online Car Auction