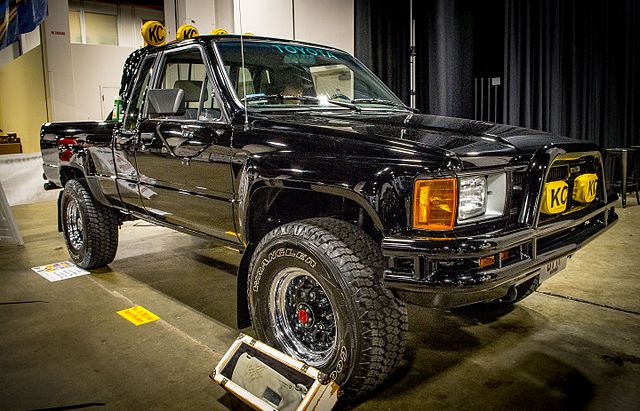 Toyota has a great track record. No matter what they set out to do, they do it. Unfortunately, “doing” and “doing it well” are two totally different things. In the 80s, the company – along with other emerging Japanese automakers were known for their compact and fuel-efficient cars. That is still their primary notoriety today. We’re not talking about sleek stylish race cars. That’s not the cool-factor that Toyota wanted. What’s cool is that Toyota went its own path. Let’s take a look at a few of them.

Remember when we said we weren’t going to get into “flashy” cars? Well, we lied. The MR2 was an all-around well-engineered car. This mid-engine 2-seater delivered optimal performance. It was based on the rear-wheel-drive Corolla drivetrain. If you wanted a car that was sporty with great handling and Toyotas famous reliability – this car was for you!

When we talk about ruggedness, durability, and reliability the 1985 Toyota Pickup is the be-all-end-all for rugged trucks. With its 4×4 capabilities and enough torque to get over most obstacles, the Toyota Pickup is one of the best pickup trucks to ever hit the market. Another feature that made it tough was the use of a Box frame. Where most pickups use a C-frame – the extra materials in the frame made it unshakable.

Toyota is known for its reliability. They are also known for their pretty affordable vehicles. Were you a kid in the ’80s who had to work their first job to get a fast sporty car? Was the affordable price range limit you a bit? No problem – the Toyota AE86 was the perfect rear-wheel-drive sports car that didn’t offer much for flash but delivered in fun. This was the start of cheap moving small-block engines. You could say this is the Godfather vehicle to The Fast and The Furious.

SkyDrive: Tested Flying Taxi Is Essentially A Success This Year