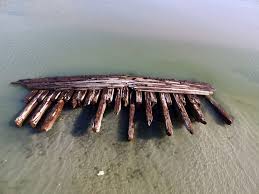 A century after it ran aground, the three-masted schooner known as the William H. Sumner revealed the largest section of its wreckage yet. While what caused the shipwreck seemed to be mundane negligence, the story of its crew proves considerably more intriguing.

Every few years, the Sumner exposes bits and pieces of its wreckage as wind sweeps the beach. For example, last year a bit of its deck appeared near the 700 block of North Topsail Drive.

This year, however, exposed the biggest cross-section of the shipwreck yet. The confluence of strong winds and battering waves cleared away a large patch of the deck, old wooden boards nailed together and dislodged from the ship to drift ashore and bury themselves – until now.

Mimi Farrell, who discovered the boards, posted photos to Facebook, noting, “This is the most I have seen of it…Would love to see it dug up for a museum or something.”

The Sumner’s unfortunate end in 1919 followed a harrowing journey for its crew. The 24-year-old Robert E. Cochrane captained the voyage from San Juan to New York City. On this trip, the schooner carried in its 850 tons of phosphate, 56 mahogany logs, as well as 30 tons of iron wood. Besides Cochrane, a crew of 7 other men saw to the ship’s operation.

On September 7, the ship drifted too near to the shore. While Cochrane planned to carry the vessel back out to sea, wind refused to cooperate. Additionally, the currents pushed him further inland. Eventually, the ship ran aground on the shoals near Topsail Inlet.

There, first mate Charles Lacey relayed the unfortunate story to local officials, which culminated in Cochrane’s suicide. As he put it, the failure of Cochrane’s first voyage distressed the young man so he shot himself in the head.

However, as evidence emerged, a new version of events suggested the crew became displeased with Cochrane. As rations dwindled, Cochrane refused to dock for more. Mutiny escalated to murder, and the crew took their young captain’s life.

Following a drawn-out and dramatic litigation process, the crew were found not guilty. However, the mystery still remains as locals question whether or not Lacey led a murderous mutiny or if the captain elected to go down with his ship.

Peak Of Outbreak In Charlotte Predicted For End Of June