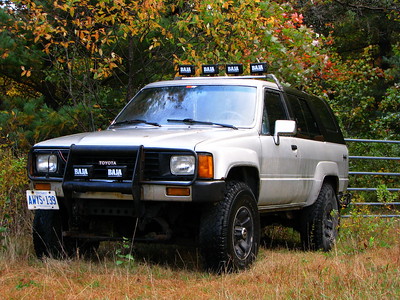 The 4Runner was by far one of the best vehicles I have ever owned. I have owned a lot of cars in my time. By the time I was 18 I was already in my third. I would buy cheap 4-cylinder bang-up cars like Corolla’s and Sentras. One of my old favorites was a ’94 Nissan King Cab, but once I started saving money and was able to put down money, I instantly chose a 4Runner.

One of the most important things I learned while buying cheap cars and fixing them up was that I didn’t really want to do that anymore. Even an older Toyota could last me forever and get me where I needed to go. Unfortunately, with my experience of vehicles, that required more elbow grease than I expected. The 4Runner’s reliability was amazing. I never had a problem. Instead of maintaining it to keep it running, I was maintaining it to keep it running optimally.

Whether I was snowboarding in the mountains, surfing on the coast or camping, that thing had me covered. I would spend nights camping in the back. With the seats down, there was more than enough room to fit a twin-sized mattress. I could put all belongings on the roof, throw a lock on them and relax in the back whenever I wanted. I know you can do this with most SUV’s but mine was totally the coolest.

The 4Runner Gas Mileage Was The Only Downside

At 16 mpg city and a whopping 20 highway, I realized I sacrificed the money spent fixing the car to simply put it into the gas tank. I didn’t mind as much considering gas was about $2.50/ gallon at the time. The whole transition to owning a nice car still was more than worth it.

It Saved My Life

You ever have a deer hit your car? It happens. It can happen literally at any time. The incident I had would have probably taken me out if I wasn’t in my SUV. Unfortunately, deer aren’t anything to mess with and when a 135 lb deer comes crashing through your windshield, you just have to say goodbye.

How To Get Prepared for Hurricane Florence in Charlotte