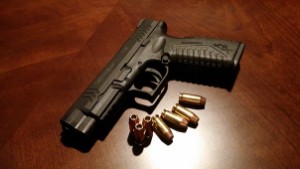 CHARLOTTE, N.C. – A man who was wanted by local police is now resting in the hospital with wounds. Charlotte Police say the man attempted suicide after he shot and injured his girlfriend in northwest Charlotte.

911 operators dispatched Police officers to a home at the location of 2600 Filson Court around 11:40 p.m. on Monday, July 8th. The call to the residence was in regards to an assault with a deadly weapon. Police responded to find a grisly and bloody scene.

The Man Had Shot His Girlfriend

When officers showed up at the location of the disturbance, they discovered a woman shot multiple times. Emergency officials immediately transported the female victim to Atrium Health’s Carolnas Medical Center in order to treat her injuries. As of right now, it’s unknown how her current condition is. The woman also suffered injuries from domestic violence prior to the shooting.

Charlotte Police detectives quickly realized that the woman had suffered gunshot wounds from her boyfriend, Reginald Simpson, 59, while they were together in the home in Filson Court. Police filed two arrest warrants on Simpson. One is for a possession of a firearm by a convicted felon and assault with a deadly weapon with intent to kill.

Around 1:30 a.m. Tuesday, police officers from the Stanley Police Department answered a 911 call that originated from the Bi-Lo located at 421 Hwy NC-27. When officers showed up, they spotted the suspect, Reginald Simpson, in the parking lot with a gunshot wound. An ambulance rushed the man to CaroMont Regional Medical Center.

As soon as Simpson is well enough to be released from the hospital, police will serve the arrest warrants. They then will take him into custody.

According to officers, this remains an active investigation and police will provide updates when they have them.