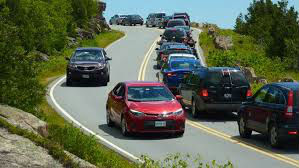 We all know that roads and highways are becoming more and more congested with cars. And it’s not just Los Angeles, or New York, or Chicago, or Houston, this problem is everywhere across the US.

With the roads being overwhelmed with impatient, sometimes distracted drivers, it puts a premium on safety. Simply put, it’s crowded out there and people are unpredictable. Just last week in Edenton, North Carolina a semi-truck driver died after crashing into an SUV stopped in the middle of Highway 17.

This accident offers ample proof that drivers out on our busy roads are unpredictable and you have to be poised to react or tragedy can strike. In this crash, the woman reportedly stopped her car to allow a turtle to cross the road. That’s right. The woman abruptly stopped her car to save the life of a turtle. Sadly, we all know how fast turtles are.

The 68-year-old truck driver, Arthur Ray Turner, was traveling at the speed limit down the highway when suddenly confronted with the unmoving SUV. Unfortunately, clogged highways and erratic driving are the new normal. Consequently, this makes it essential to be a safe, aware driver. In other words, you have to be a few moves ahead of the drivers around you, don’t assume their driving will be consistent.

In this particular accident, the semi-truck crashed into the woman and then was sent hurtling into a ditch. Both vehicles were beyond repair. Turner, the truck driver, managed to pull himself from the wreckage. He later ed away in the hospital due to his injuries.

Meanwhile, the woman walked away from the incident unharmed. Unfortunately, despite her humane gesture, the woman ultimately ran over the turtle. But again, the point is clear, you have to be extra alert on the madhouse roads and highways we travel on. You just never know when somebody in front of you will suddenly stop to allow for some kind of critter crossing… Or something similarly unpredictable.

Choose the trucking training method that works for you

Decision 2020: Where Truckers Are Leaning To Vote During The Election