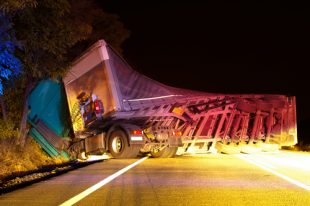 CHARLOTTE, North Carolina — The northbound lanes of I-77 in Charlotte, North Carolina, are shut down following a major tractor trailer fire this afternoon. While tons of emergency personnel are working to clear the damage from the crash and subsequent fire, they’re also searching for answers.

The fire started just before 1 p.m. on I-77 at Sunset Road. After a crash involving a large tractor trailer, the massive truck caught fire. Drivers quickly began evacuating the area, including the driver of the tractor trailer.

Authorities have not reported any injuries as a result of the crash. However, they will investigate the crash heavily. After all, the potential damage from a crash and fire like that is immense. They’ll want to make sure they can prevent future crashes like this.

More than 30 firefighters and several agencies responded to the blaze. Although it took them a while, the firefighters were able to calm the blaze down. After they were done, it was time for law enforcement to take over.

Investigators are still working to determine the cause of the fire. If they determine that foul play was a factor, there could be serious criminal charges in someone’s future. Of course, such charges are pretty unlikely to actually happen. However, if someone did choose to cause a fire on this scale, they’d be in deep trouble. Charlotte doesn’t take kindly to people who cause traffic to get that much worse, after all.

Miles long traffic backups have been reported in the area, with many drivers exiting their vehicles and standing outside on the roadway. It isn’t clear when the northbound lanes of the interstate will reopen. However, once it does, people will definitely be glad for it. Traffic is bad enough as it is in this city without having to deal with such large detours.