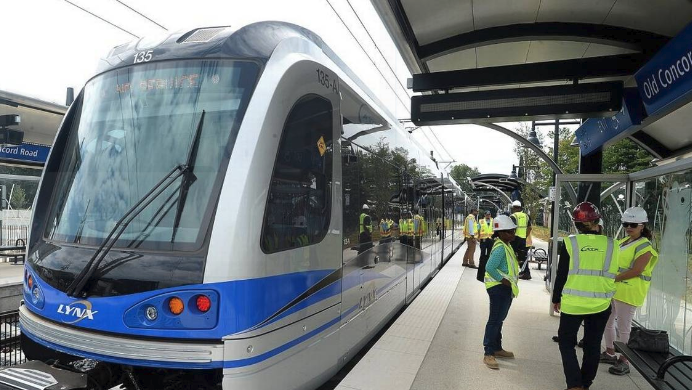 The Blue Line Extension will include 9.3 miles and 11 stations, from uptown to UNC Charlotte. The whole Blue Line will enable passengers to take a nearly 45-minute ride from Interstate 485 in south Charlotte to the college.

Charlotte will host the first and second rounds of the men’s basketball tournament. Those games will be played March 16 and Sunday, March 18, and people staying in hotels in University City can have easy access to the arena. People from all over, from as far away as Los Angeles, will be in attendance.

In August, CATS hoped to already have opened the extension. But the project was delayed, and CATS announced the new opening date of March in early 2018. The end of March is the transit system’s deadline with the federal government. The Fed paid for half of the project’s construction costs.

Lewis said the project is still under budget.

CATS said the opening will lead to other changes in the overall transit system. CATS will change some bus routes so that they connect with new light-rail stations.

And a new program called “Envision My Ride” will likely bring more changes to the bus system, as CATS plans to start more crosstown routes instead of having almost all buses feed into uptown. Envision My Ride will be rolled out later this year.

Starting Jan. 21, CATS will begin operating trains on the extension as though it were on a regular schedule, at both and day and night. Trains will stop at stations and even wait for passengers, to simulate what the transit system calls “dwell time.”

After nearly 2 months of that testing, the train will be open for passengers. CATS will hold some sort of celebration when the extension opens, though those events haven’t been scheduled yet.

Car Shipping Works for Businesses, Too

Charlotte Recovers After Another School Shooting

The Subaru Crosstrek Has Quirks and Faults but Drivers Love Them